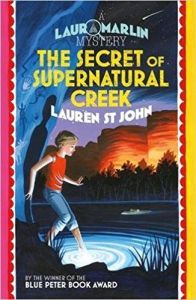 Eleven-year-old ace detective Laura Marlin is back for her next exciting adventure in the fifth mystery from award-winning author Lauren St John.

‘Anyone ever told you that you’re too clever for your own good, Laura Marlin?’

With her arch-nemesis, Mr A, safely behind bars, Laura Marlin can’t wait to relax on a school trip to Australia. But hours after arriving, a seemingly supernatural message makes her fear for her safety. As the group tours the Northern wilderness, mysteries and near-disasters haunt them, but only Laura believes they’re connected. Can she figure out what’s real and what’s an illusion … before it’s too late?

Why I can’t wait to read The Secret of Supernatural Creek:

The Secret of Supernatural Creek by Lauren St John