Mid-July means walking past the freezer isle, drooling over boxes of ice-lollies. As a kid, I had great ambitions to try every type of ice-lolly under the sun during those six-week summer breaks which lasted a life time. These days, I’m hyper-aware of the calorie count.

What better way to eat every type of ice-lolly than to match them to books? This is how the conversation between myself, Amy and Charlotte began. ‘Mini Milks – Short and Sweet’, said Amy. An hour of Twtitter-Chat-Gold later, and our tag was born.

I hope you enjoy. If you are tagged, please tag FOUR other people and credit Amy, Charlotte and Louise. I guarantee you will be craving a Nobbly Bobbly or a Mini-Milk by the time your answers are written. Thanks to Charlotte for the cute pictures, and Amy for the Banner. 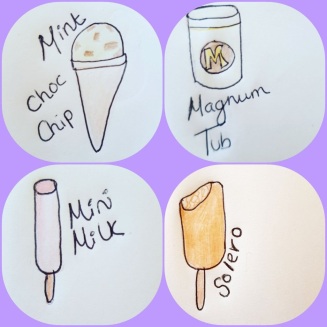 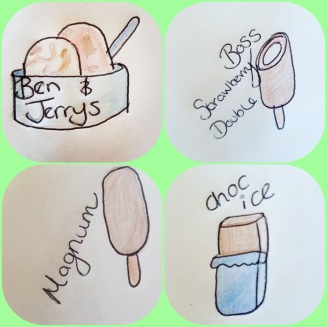 The Aarhus 39 stories. 39 short stories by some of the strongest emerging children’s writers in Europe. What’s not to love? I’ve read all the stories, and know I will be rereading them for the rest of my life. Read my review of YA collection Odyssey here.

Cornetto: Book with a surprise ending?

A Girl Called Owl by Amy Wilson. The best sort of surprise endings hang over your head throughout the novel. As well as the ending, there is a surprise which made me catch me breath. It had been there all along.

Rocket Ice Lolly: a book which looks more exciting from the Outside?

Harry Potter and the Cursed Child Script. I don’t care if it’s Harry. I don’t care how many awards the stage production won. Voldemort was nothing more than a pantomime villain, and the plot was so dull I barely remember it. Compared to Fantastic Beasts, which is one of the best stories I’ve heard in the past year … This wins the Rocket Lolly because ‘Harry Potter’ made me expect more.

Ben and Jerry’s – Most Versatile Author

Geraldine McCaughrean. From haunted seaside music halls to the early days of the American railroad, to Noah’s Ark, McCaughrean can take any setting and tell a great story. I have her latest novel form the library. Whether the library will get it back is a moot point.

Heartless by Merissa Meyer. Why set up that fascinating story about Chess if the reader was never going to see it? There was potential for a seven-story series. Instead, it was cut off with something which amounted to ‘you didn’t see that coming’. Did I say earlier this was the strongest type of surprise? It can be done badly, it can be done well. Done well, it doesn’t sweep away the plot as it stands.

Calippo – Reader has to Work to Get the Good Stuff Out

I’m interpreting this as a story made stronger by textual analysis. My answer is Kit’s Wilderness by David Almond. A strong adventure, when you think about the structure, you realise the story is a metaphor for storytelling. A story which is already strong becomes 100 times more interesting. I get something new out of Almond’s stories on every reread.

The Bombs that Brought Us Together by Brian Conaghan. Charlie Law wants a space to escape the bombs and the tyranny. The Big Man is willing to provide that space, at a cost. The Big Man says it is time for Charlie to decide between ‘them’ and ‘us’. A look at war, and political tyranny, the ultimately uplifting message is to look at the things we have in common, not the things which make us different.

Boss Strawberry Double – Book by an International Author (nb. Country other than your own.)

Piglettes by Clementine Beauvais. A super-uplifting summer read about overcoming the slurs people throw at us, and finding what out what is important to ourselves. Check back for my review on Thursday.

The Head of the Saint by Socoroo Acioli. A kid hides in the head of a fallen statue, and answers the prayers of a town. Should it work? It does. It so does. Would take a reread to do it justice, but I remember raving about it.

Barefoot on the Wind by Zoe Marriot. Again? Yep, but Marriot deserves Crunchie Blast Crown. Instead of lanching into sugary tributes to someone else’s vision, she thinks about the story she is retelling, then plots something new. Her Japanese-style fantasy world was perfect for Barefoot on the Wind, with its whispering trees and daemon women. Marriot is writing a Little Mermaid spin-off. I can’t wait for her take on the story.

One Italian Summer by Keris Stainton. Yup, it deals with grief, but it also has great mother/sibling relationships, a handsome boy on a motorbike and a fashionable girl in the sunshine. It proved that light, summery reads can have substance.

Choc-ice – Book you don’t want to admit you love

Hairy McClairy. Actually, I’ll shout it to the world, but I was once in a situation where a group of not-very-pleasant people said how rubbish the Hairy McClairy books are. Rubbish? The plot isn’t elaborate, but listen to those words. ‘Bottomley Potts all covered in Spots.’ If I’d asked you to write the start of that sentence, you would have said Fred Smith, or Dot Trot. Not got the same ring to it, has it? The best picture books look deceptively simple.

I ran out to get Strange the Dreamer. When I started blogging, everybody had beautiful photographs of this blue book on their Twitter feed. Six months on, it is still pristine. As in untouched.

Mint Choc Chip – Love it or Hate it

Wonder. Either reading about a kid with a facial disfigurement reaffirmed your live and broadened your horizons, or you hate that Auggie’s character development is all about his disability. Love it or hate it. It’s mint choc chip.

I tag: Sarah, Donna, Bex and Kelly. With strawberry sauce and a flake on top. Take our little tag out into the world, guys!