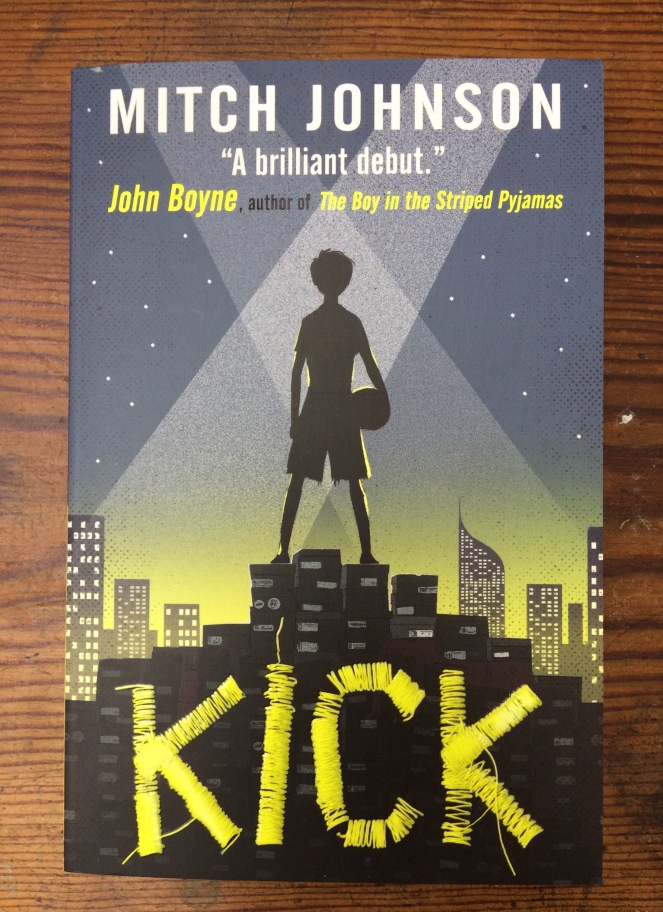 Dad works in a factory that makes smart shirts for businessmen, and even though he doesn’t have to, he always wears a short-sleeved shirt with a collar to work – either his white one or the one with yellow and blue checks. He’s says its important to be proud of yourself. He’s always telling me: ‘Budi, if you don’t respect yourself, nobody will. You must be proud of who you are.’ Today he’s wearing the shirt with yellow and blue checks, and it sticks to a sweaty patch on his chest. As he gets closer he smiles and sits down on the step beside me.

‘What’s happened here then?’ he asks, kissing me on the head.

‘I cut my leg playing football.’

Dad leans over and grimaces as I show him my knee. The cut glistens with fresh blood.

‘Make sure you get all the grit out. We don’t want it to get infected.’

I nod and keep brushing it with the cloth.

‘No, but I scored the most amazing goal, so it was worth it.’

‘Good boy! Keep it up and you’ll play for Madrid one day.’

‘Real Madrid, Dad. If you just say Madrid it could mean Atlético Madrid, and I would rather never play football again than play for them.’

Budi is Twelve. His dream is to play football for Real Madrid like Kieran Wakefied. Budi practises in all his spare time: in his work break, and if the factory foreman doesn’t keep him over time.The rest of the time he sews football boots together, unless the foreman is cross enough to stick Budi on the boxing section.

Life in Jakarta is hard. There’s talk of a pay rise, but most people say it will never come. Without a pay rise, there is no money for Budi’s education, or Grandma’s medicine. Budi lives with his parents and Grandmother. There was an uncle, but nobody ever speaks of people who go to prison. There are only two ways out of prison: keeling or standing.

Then there’s The Dragon, the main Landlord and money lender. Cross him and he’ll chew you up and spit out your bones.

When a bad kick puts a football through the Dragon’s window, Budi finds himself in the Dragon’s pocket. If the Dragon kills him first, he’ll never play for Real Madrid.

I took interest in Kick for two reasons. Initially I was interested to see a well-written children’s book about football. Don’t mistake me. I’m not interested in football. However, since I sorted books in a charity shop nearly ten years ago, I have been interested in how some subjects in children’s literature inspire poor quality writing. What do I mean? Well, there’s Mal Peet’s series, and lately Tom Palmer has won a lot of fans. How many well-written books about football have you seen? How many poorly-written? I don’t think it is that the good stuff isn’t written. I think there is just a proliferation of books. If you want to see this illustrated, check out one of Palmer’s books on Amazon, and look at under the words ‘customers who bought this item also bought’. Point made.

When I saw Kick in the shop, I knew I had to buy it. The second reason I took interest was the Amnesty International endorsement. Every children’s title I have read this year which has been endorsed by Amnesty has been well-written, and offered me a different perspective on the world. Kick was no exception.

Budi is so optimistic and so determined. I liked what Mitch Johnson said in the interview at the back of the story. Maybe we can’t truly know what it is to experience Budi’s daily life, but we can understand shared hopes and dreams. Football becomes a powerful link between Western comfort and an impoverished life in the East. So does the theme of aspiration in general. We all have hopes and dreams, although too often we ‘outgrow’ these. Get too tired. The message is loud and strong: if you want something, never stop working for it. This message, written for the readers, helps us to empathise with Budi.

Budi has some shocking experiences in the course of the book, which offer a window into that life, and show us how much Budi is up against. The moment which will help child readers get some sense of Budi’s life, and how unfair it is, isn’t an event at all. It’s number-crunching. How long would Kieren Wakefield have to work to earn Budi’s salary? I found it so poignant, that Budi hadn’t grasped the disparity between their lives. It is a clever way to interest children in an issue which might be frightening to think about. Children too young to think about the brutality are capable of understanding those numbers are unfair, and wrong.

I loved Budi’s friendship with Rochy. Rochy has dreams too, but he thinks they are over. His mother and sisters are so worn down, they barely speak. It would have been a distressing and bleak read if Budi and his family felt the same way, but by making him so close to Rochy, we are able to think about how such a life would wear you down, then take comfort in Budi’s dreams. At MG-age, this is hugely important, but I think something similar is true for adults. I might read a few pages of non-fiction on such a difficult subject, but if I’m investing time in it, I need something uplifting.

Masterfully written, yet still accessible. It is interesting to see a story which isn’t about football, but uses football to open an important conversation. I look forward to anything else which comes from this talented debut author.

2 thoughts on “One kick and it could all be over. Kick by Mitch Johnson”