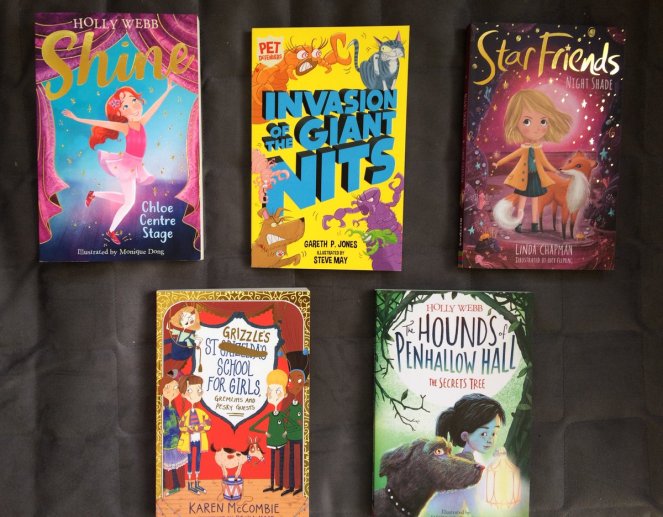 The Hounds Of Penhallow Hall by Holly Webb and Jason Cockroft

Penhallow Hall is full of ghostly dogs, waiting to wake up and share their stories. Polly is excited when she wakes up the ghost of a terrier called Patch. Can Polly help Patch remember what happened to his boy Jake? Did Jake run into trouble from the terrible Highwaymen of the 1700s?

This is one of the loveliest quick reads I have encountered in a long time. This series would be brilliant for introducing children to different time periods. We learn so much by empathising with a character. Young readers will turn the pages to find out whether Patch and Jake are reunited, and I adore the canine guardian of all the ghost dogs, Rex.

I recommend this series to people of any age who love time-slip. Think Green-Knowe with dogs. It may only take a couple of hours to read but this is brilliant storytelling. Although this is part of a series it could be read as a stand-alone.

Jason Cockroft’s illustrations bring the historical hall and forest to life. I feel as if I have been there. This is a dream author-illustrator pair.

Maia and her friends are back for another adventure. Star Friends follows a group of children who have a special bond with magical animals. Together they protect the world from Dark Magic.

The woodland plants are dying because someone is creating potions with dark magic. Meanwhile, the girls are divided by new-girl Essie and her clique, and the grown-ups have all become seriously competitive. Can the girls put aside their differences and find the source of the dark magic?

The story in Star Friends continues from one book to the next so if you are new to the series I would recommend starting at book one. I can see this series being very popular with 7 – 9 year-olds. Tween girls can develop a real interest in friendship groups and life-stages. This story explores current-age friendships while looking at the girls’ future ambitions and goals. This installment looks at popularity and competitiveness.

A series with the magic of Harry Potter and the cute-factor Animal Ark.

Chloe is desperate to go to The Shine School for the Performing Arts. It is only when she gets in that she realises she won’t be the only funny, confident and talented student. How do you stand out at a school where everyone is talented? Chloe goes overboard to make people laugh but her jokes backfire when the teachers complain about her behaviour. Will Chole ever fit in at The Shine?

It was lovely that one of the characters didn’t make it into The Shine but plans to achieve her ambitions via a different path. No child should feel like a failure at eleven. Children need to see that success can come at the end of infinite different paths.

Pet Defenders – Invasion Of The Giant Nits by Gareth P. Jones and Steve May

Earth has been invaded. Gadget genius Annascratch and her army of NITS (Nano Inventive Trained Soldiers) have invaded Earth and it is up Pet Defenders Biskit and Mitzy to stop them. Aided by Agent Daley they set out on their mission, but the NITS keep getting bigger. Do they have a weakness? Can the Pet Defenders find it before it is too late?

Animals, aliens, gadgets and burp-jokes combine into a laugh-out-loud funny adventure. The humans are totally unaware that their pets are fighting dangerous invaders so the reader feels as if they have been let in on the secret. I can see lots of children being unable to resist this combination of action, humour and favourite animals. I loved the lead pair and their discussions about animal fiction (Why are cats always cast as the baddies? Why is it never a dog?)

Steve May’s illustrations are brilliant. Any child who likes drawing their own monsters or robots will be inspired by these creations.

Funny books are the way forward.

This is at the longer end of young-MG and combines humour with a warm-hearted story. It also gets a big thumbs-up in terms of representation. The children are as diverse as children in a modern-day primary. Do you remember wishing you could go to a fictional school? I imagine kids will be tickled by the slightly madcap way of life at St Grizzle’s.

The narration is chatty and casual and something happens on every single page. This hit series has already gathered lots of fans who will be delighted to see it back for another story. 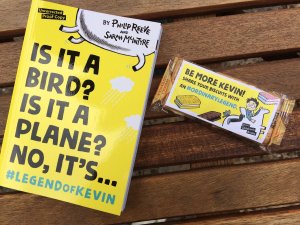 The Legend Of Kevin by Phillip Reeve and Sarah McIntyre

Max has always wanted a pet but he lives in a top-floor flat. Not having a pet makes Max sad. Then Kevin arrives. Kevin is a flying pony who blows to Bumbleford during a storm. During the same storm, Bumbleford is flooded. All sorts of strange things happen when the sea monkeys and mermaids move in. Can Max and Kevin set things right?

How can anybody resist this book? One look at Kevin’s cute little face and I was sold. Sarah McIntyre’s drawings always make me want to reach for a pencil and I imagine they will have the same effect on young readers. They are so imaginative and sweet and full of energy.

This is imaginative and gentle and would make a lovely bedtime story. 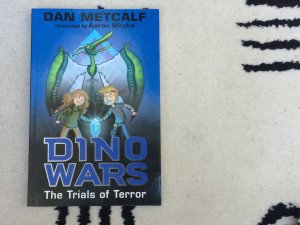 Adam Caine and his friends have found two Dilotron Crystals so far, but they need two more to deactivate the deadly Coda Program. One might be at the heart of Pteratopolis, the city of the pterosaurs. Will siblings Adam and Chloe be able to work together to get it?

Dystopia can be suitable for very young readers. Dan Metcalf has proved this with Dino Wars, a series set in a future in which humans and dinosaurs live together and a reactivated bio-weapon threatens to wipe out all dinosaur life. This is the second book in the series. Adam is having issues with leadership. It was his fault the weapon was reactivated so he must be responsible for saving the dinosaurs.. right? His sister Chole doesn’t reckon so and she is going to challenge him all the way.

Like all great dystopia the children see signs of ruined civilization all around them – ruined cars and huge rubbish dumps. It is so important for children to start questioning how they treat the world from an early age and dystopia is way into these issues. The stories are suitable for very young children. While they touch on deep issues the primary goal is to save the good dinosaurs.

These adventures will leave children desperate for the next installment.

A big thanks to Stripes Publishing, Maverick Arts Publishing and Oxford University Press for sending copies of the books in this feature. Opinions my own.