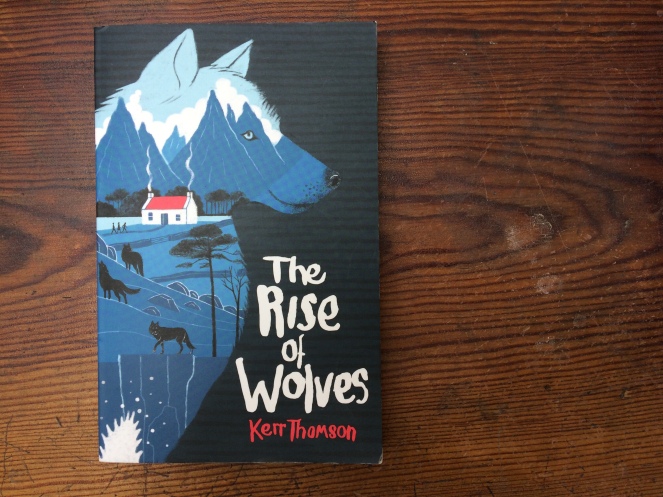 The next Laird of Nin couldn’t just be any man. He had to be brave and noble and strong. He had to prove himself worthy. And so a challenge was set. If any man, and it was the eighteenth century so it was only men, no women allowed, if any man could successfully re-enact The Bonnie Laddie’s Leap and jump the gap from one side to the other, he would win the prize. And what a prize! There was even a castle.

Innis Munro is walking home across the wilderness of Nin Island when he hears a wolf. There are no wolves in Scotland. Wolves were hunted to extinction three-hundred years ago. And who is the strange boy, Lachlan, and why is he so cagey?

When an energy company decide to build turbines on Nin Island, it seems the wilderness will be destroyed. Then Innis finds out about the old legend which says anyone who jumps across a huge chasm becomes the Laird of Nin. If he completes the challenge, he will own the land the energy company plan to build on. And he might even be famous.

All that stands in his way is a surly boy and a gap so wide men have died in the attempt.

This is a classic coming-of-age story. The strong local setting and the protagonist who is determined to transform themselves into something more. For Innis, it is about being a champion. About being noticed. This story has all the joys and pains of being young.

Anybody who knows my reading tastes knows how much I like stories centered around a local legend or myth. This story centres around a contest which has been open so long it is part of local folklore. It all began when Bonnie Prince Charlie jumped the impossibly-wide chasm to escape a band of soldiers. The first man to perform the leap would be made Laird of Nin. There is a second legend at play – the wolves of Nin are supposed to be extinct. They too are a story from history. I love how these two strands build until they come together, and I love how we feel connected to the island’s past.

The book has a strong trio – Innis, who wants to be noticed. Lachlan who wants to go unnoticed. Kat who wants to be noticed one day but is happy to wait. I loved Innis because he was so determined to try to the point that he was sometimes impulsive. Lachlan has a good heart but doesn’t want people to know it. I finished the book not only feeling I knew the main characters but knowing I had empathised with them. Empathy is surely the most important reason to read.

Although I have never visited the Scottish Islands, I felt familiar with them by the end of the story. There is a clever balance between showing tradition and history which tells us about the island and things which are universally familiar – the kitchen table, the dance hall and the trio of friends heading to school.

This was a book I meant to read last year, and I am pleased to finally have it on my shelves. I can’t recommend it enough, especially if you like stories centered around old legends.

4 thoughts on “Review: The Rise Of Wolves by Kerr Thomson”