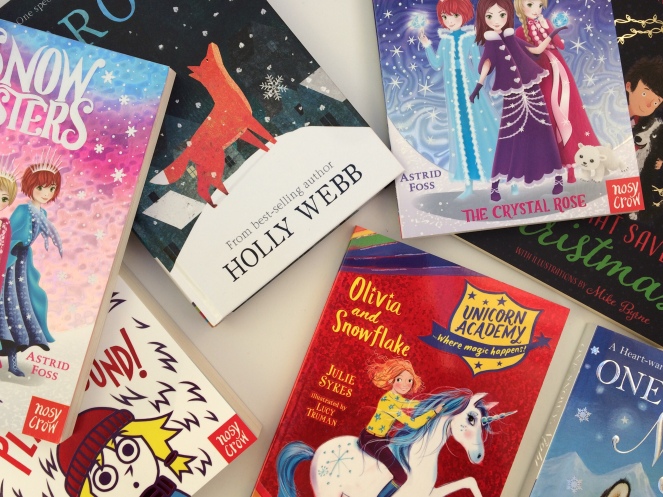 Olivia is happy to be at Unicorn Academy, but life would be even better if she could bond with her unicorn, Snowflake, ahead of graduation, otherwise her friends will leave her behind and she’ll be stuck with the horrible girls. Olivia is also hiding a secret. She doesn’t want her friends to find out her family is super-rich. Meanwhile, someone at Unicorn Academy is causing trouble with dangerous spells. Can Olivia and Snowflake save the day?

This will capture the attention of all young readers who love unicorns and sparkle, but more to the point it is a well-written story. We care about Olivia and Snowflake, and want to see them graduate alongside their friends. There are also messages about kindness and empathy which will resonate with young animal-lovers.

The Keepers Of The Lights keep everything in balance. It is their job to guard the Everchanging Lights which shine in the sky. Triplets Magda, Hanna and Ida know that one day it will be their responsibility. The Shadow Witch has returned and she is determined to steal the lights from the sky. When their parents fall into trouble, it is up to the girls to hunt for the three snow globe which will keep the Lights safe. If they don’t act fast, the Kingdom will fall under an evil power.

The first in a new series, this story is full of the same magic as Frozen – lights in the sky and arctic animals, a palace with stained-glass windows and sisterly love. The world is clear from the first word and young readers will want to join the sisters as they venture through this landscape. A strong quest-narrative which will keep the reader hooked across the series.

With The Keepers Of The Light trapped buy the evil Shadow Witch, it is up to Magda, Hanna and Ida to protect the Everchanging Lights from harm. With one orb found, the girls have two to find before they can save their Kingdom from harm. Their mother’s clue sets them on the trail of the crystal rose and the blue orb.

This book is the second in the series, and continues the quest began in The Silver Secret. This is a very strong quest story for very young readers. There is enough threat to build suspense but nothing which would overwhelm the audience. The world is enchanting and we learn more about the main characters as they develop.

The Dog That Saved Christmas by Nicola Davies. Illustrated by Mike Byrne.

Jake hates Christmas. There’s no routine, everyone acts differently and the flashing lights fill his head so he never has a break from them. Even school is disrupted by preparations for the Christmas show. Nobody cares about all the facts Jake can contribute to the nature show – they just want the kids to dress up in animal-costumes. Jake decides to take on Christmas … and causes a lot of damage in the process. Then Jake meets a stray dog, and Christmas no longer feels so unmanageable.

This story shows how Christmas can disrupt the lives of people on the autistic spectrum. It also shows that, although people with autism sometimes behave in a way which appears frightening, it is often because they themselves are overloaded, confused or frightened. The bond between Jake and Susan shows the instinctive empathy many autistic people have with other animals, and slowly the people around Jake begin to see how Christmas feels from his perspective.

A brilliant read for empathy.

Cassie thinks the Foxes that live near her block of flats are beautiful, especially Frost, the fox with the white-tipped tail. One night, Frost leads Cassie out of her home and into the streets of 1600s London. The Frost Fair may be fun, Cassie needs to return to her home and help her neighbour.

A winerty time-slip adventure which captures the magic of London’s historical frost fairs.

I loved the relationship between Cassie and Mrs Morris. It begins with misunderstanding and grows into true empathy and a shared-secret.

Why pick one wintery animal story when you can have ten? This charming anthology brings together some of the strongest writers of younger middle-grade fiction including Sita Brahmachari, Linda Chapman, Holly Webb and Candy Gourlay. From a trip to Mongolia to see snow leopards in the natural surroundings to the story of a baby-panda who gets separated from her mother on the journey down the mountains, this anthology is full of animal tales.

Some of the stories are about humans who come into contact with animals, while others focus on animal-characters. All are well-written and my favourites were the ones which taught us about real animals in real habitats. As an anthology for very young readers, it could not be better – there is something to suit everyone and every one of these stories would be a perfect read in assembly or ahead of bedtime.

Thanks to Nosy Crow Books, Stripes Publishing and Barrington Stoke for the books featured in this round-up. Opinions my own.