When I was a child we had a set of The Lord of The Rings in our house, they were kept on the very important bookshelf alongside a very old bible (we weren’t an especially religious household) some photo albums and some other “leather” bound classics I think my mum and stepdad had bought from a door to door salesman!

I loved those Lord of the Rings books so much, even though I hadn’t (and still haven’t!) read any of them. What I loved about those books was the beautiful maps inside of them, all in black and red ink, they folded out to three times larger than the book themselves and I loved to poor over the map and imagine the places named on it, Mordor, Khand and Near Harad. Imagining my own stories and people that might live in those places. That was always much more exciting and fun than delving into the books for me – and that should have been a clue really!

I also loved drawing and making my own maps as a child, often treasure ones inspired by The Goonies, I loved drawing rivers and hills and forests and again my imagination would burst with the stories that perhaps unfurled in these imagined places. I used tea and coffee to stain them and to make them looked aged and I remember being over the moon when my nana actually shoved one in the oven to make it look really distressed (but don’t try that at home though folks!)

So when I started to write my stories as a young child and teenager I was always thinking about the world they were set in, drawing little snippets of maps or building layouts to give the characters a real place to inhabit, a place to be, a place to live! But this was always on the grand scale – rather like Lord of the Rings.

When I started work on what was to become The Apprentice Witch Trilogy I had a clear idea of this small island Kingdom and the neighbouring Kingdoms across the sea. Hylund, Dannis, Grunea, Veersalnd and The Uris.  That was all fixed in my head from the outset. As the edits and different versions of the story evolved over the months and years of writing, so too did the maps, settings came and went, Arianwyn moved from a tumbledown cottage outside of Lull into the Spellorium (a location that has become a favourite with readers I’m thrilled to say!) and the story became steadily more focused on the odd little town on the edge of the Great Wood that surrounded it, my world was becoming less epic it seemed.

Then I realised that one vital map was missing.

I needed a map of the town. A Place I was writing about more and more but couldn’t always see clearly in my mind, where was the Spellorium in relation to the Blue Ox, how would Arianwyn get to the Great Wood, where was the river and many other questions. So I drew a scrappy map and pinned this to the noticeboard over my desk and like magic, Lull was a real place, full of homes, businesses, people and most importantly stories!

When it was revealed that the map of Lull was going to be included in A Witch Alone I was over the moon! But I had one evening to pull my scrappy sketch into something that could be translated into a suitable illustration (by brilliant illustrator, David Wardle) to make the print deadline. What he did to turn my scribble into the beautiful illustration is nothing short of magic and I loved it. But having the map feature in the book presented the challenge of having the map “proof read” – i.e does it reflect accurately in the story? Yikes!

Well I’m pleased to say that with the exception of a moving telephone box (I blame vandalism!) and a small pond that had to be magicked up, everything was spot on! 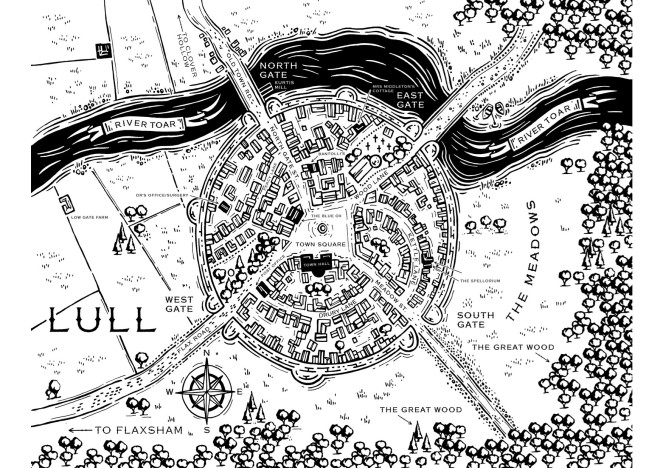 Never in a million years when I was drawing those maps as a small child or pawing over the middle earth map did I ever imagine a book I had written would contain a map of a world I had created. If I could go back in time and tell myself that as a ten-year-old I would, I’d love to see the look on my face!

It is so clear to me now that it was the map that helped to keep my story centred, gave it a heart and focused our attention not on the magic of the story but the people that fill it, their lives. It was the key to creating a place that readers have said they want to go and live in – and as an author what more could you ask for than that!

Many thanks to James Nicol for your time and wonderful guest post. This is a tremendous insight into how you use maps to develop your work.

A Witch Come True by James Nicol is out now in paperback (£6.99, Chicken House).

One thought on “Blog Tour: A Witch Come True by James Nicol.”