Lollies 2020 blog tour: The Legend Of Kevin by Philip Reeve and Sarah McIntyre.

Welcome to the Lollies 2020 blog tour stop for The Legend Of Kevin by Philip Reeve and Sarah Mcintyre.

So what are the Lollies?

The Laugh Out Loud Book Awards, or the Lollies, celebrate the best in funny children’s fiction. They are voted for by children and cover three categories – picture books, 6-8 year olds and 9-13 year olds. The current awards have been shortlisted and will be announced early in 2020.

All about The Legend Of Kevin

The Legend Of Kevin has been shortlisted in the 6-8-year-olds category.

Reeve and McIntyre are a well-established duo. Both talented creators in their own right, with Phillip Reeve best-known for the hit success that is Mortal Enginges and Sarah McIntyre a well-known name in work for younger readers, the pair began with Cakes In Space and soon built up a selection of titles which proved a great hit with readers of all ages.

The Legend Of Kevin is the first book in a new series. It follows a roly-poly flying Dartmoor pony who is blown from his home during a storm straight into the lives of Max and his family. Together, Kevin and Max sat out to save the town from an invasion of creatures (with a little bit of help from Max’s teenage sister and a truckload of custard creams). 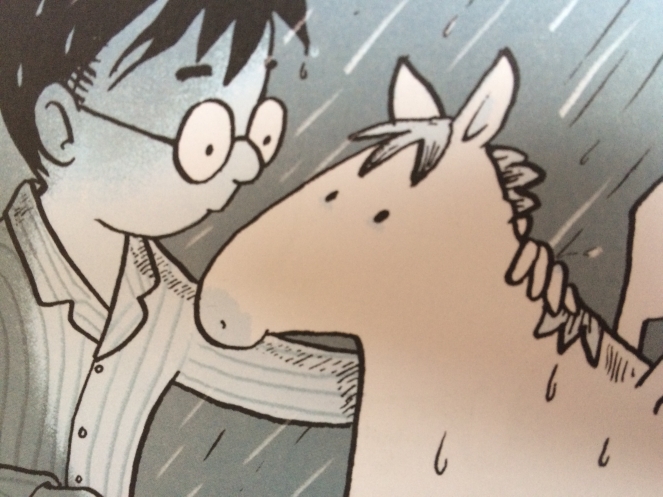 I was delighted to be offered the chance to represent Kevin on the 2020 Lollies blog tour because it was a book I looked forward to for a very long time. Way back when I was a student, I remember looking on Phillip Reeve’s blog after reading Mortal Engines and finding a little cartoon about a flying pony. It stuck with me through the years, and when I heard that the idea had been expanded into a book with illustrations by Sarah McIntyre (whose Pugs Of The Frozen North I had attempted to draw) I was extremely happy.

I wanted everyone to know more about how Kevin came to life and am delighted to share the story and some sketchbook illustrations with you. Thanks to Sarah McIntyre for your time and resources.

Where the idea for The Legend Of Kevin came from by Sarah Mcintyre.

Kevin the Roly-Poly Flying Pony first began as a tiny painting on a piece of driftwood that Philip Reeve found on the beach in Brighton in the 1980s. He hung it on his wall, and each time he moved house, he’d take it with him.I spotted it on the wall of his kitchen while my husband and I were staying with the Reeve family on Dartmoor, and I thought it would be a fun character to draw. We’d seen a lot of cute wild ponies out on the moor, and it amused us to imagine them flapping among the big rocks there, snaffling up hikers’ biscuits. We started it out as a dare: Philip wrote a bit of text and I’d draw a picture each day and post it on my blog. (You can see the short story we created this way in our Pug-a-Doodle-Do! activity book.)  I made a few more paintings of Kevin, and eventually we turned it into a book – then two books! Now we’re working on the third book: we thought up some story ideas together, Philip wrote it, and now I’m working on the pictures (although Philip came to my studio and gave me some help with some of the pencil roughs). It’s fun creating stories with a friend, we always have a good laugh. 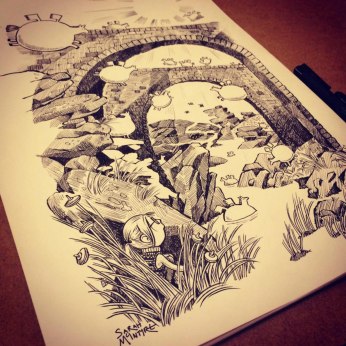 The Lollies Shortlist is available to view now. Thanks to Sarah McIntyre for your time and resources, and to Antonia Wilkinson for organising.

I was sent a copy of The Legend Of Kevin as part of this promotional blog tour. Opinions remain my own.