Every Saturday, my Twitter feed is full of felines. Half the world puts up a picture of their cat. Why not? It’s Caturday?

Every day is Caturday in my house. We love cats. I’ve had cats since I was born. My life’s ambition is to become mad cat person. Sorry guys. Cats are just nicer than humans. What can I say?

Maise and Willow came to us in October, from Eden Animal Rescue. I would like to make Maisie and Willow more of a presence on my blog. Frankly, they help write the pieces. Maisie’s rolling about at my feet as I type. They deserve some of the credit. Today I’m going to introduce you to their personalities bookish style. Which books sum them up?

Favourite Place: curled up on a chair. 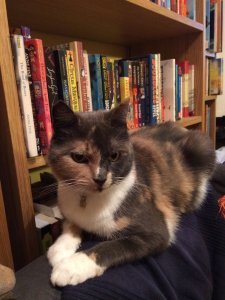 Favourite Place: field behind the house