Meet Inanna who conquered a mountain. Bridget who rid her house of witches. Kandek who outsmarted a wearwolf. These heroines are fearless, bold, quick-thinking and smart, and their stories make for excellent reading.

Folk stories have been important to me since I was small. It began with music. Songs I heard as my Dad worked through his collection of LPs, cassettes and CDs. Steeleye Span, Fairport Convention – the stories they sang weren’t always fully comprehensible to my young mind but I got the jist enough to know that they were a little more exciting than the limited cannon of fairytales that was read on a regular basis to children. Later, I found a collection of folk tales retold by Kevin Crossley Holland and my interest in folklore really took hold. How stories grow out of human experiences. How time and place shapes the retelling, until each culture has its own canon of best-known tales.

This collection includes tales from different cultures. It reflects the fact that stories are told and retold all around the world.

My favourites included The Lace Dragon, the story of a girl who outsmarts the Emperor demanding her hand in marriage by drawing on her magic as a lacemaker, and Goddess VS Mountain, which is the story of a girl up aganist the might of the land itself. The stories have such different themes and settings that the collection remains engaging. As an adult reader, it reminded me of the magic of being a child and begging for just one more story.

The way these stories are written lends itself to speaking aloud. It is an art in itself to write with such clarity and yet in a way that draws the reader in and keeps them hooked.

As a society, we are becoming increasingly aware that the notions we form about gender begin early and restrict our ideas about our identities. Countering stereotypes is important if we are to offer the next generation a wider range of ideas about who they might become. The fact that this collection shows girls being clever and active, angry and proactive and energetic will make it  popular with teachers, librarians and parents looking to counter narrow ideas about what it means to be a girl.

It turns out happy ever after can come in all kinds of ways. These tales are well written, timeless and filled with strong female role models.

Thanks to Faye Rogers PR and Bloomsbury Education for my copy of Fierce, Fearless And Free. Opinions my own. 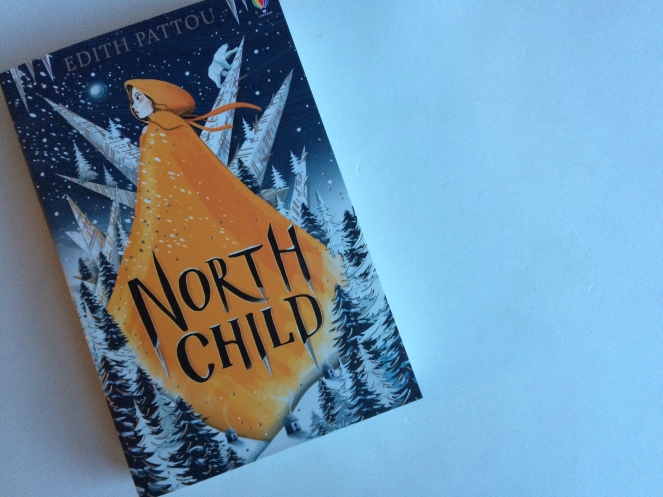 Then the white bear was at the door. And before any of us could move, Rose had crossed to him. She reached behind a large wooden trunk that stood by the door and drew out a small knapsack. She must have hidden it earlier.

‘I will go with you,’ Rose said to the bear, and I watched, unbelieving, as the animal’s great paw flashed and Rose was suddenly astride the bear’s back as if he were some enormous horse.

No matter how hard her mother tried to deny it, Rose was born facing North. And just like the old stories about North-born children say, she longs to venture far from home.

When her sister gets dangerously ill, and the family is in danger of losing its home, Rose makes a pact with a mysterious white bear. In exchange for her sister’s survival and her family’s prosperity, Rose follows the bear to a strange palace where she remains with him, uncertain why he called on her.

Rose spends her days exploring the palace and weaving in the sewing room. At night somebody sleeps beside her, but she never quite sees this person’s face. The more Rose sees of the palace, and the more she comes to like the bear, the more curious she gets.

Can she unravel the secret of the palace without ruining her own destiny?

It has been some time since I got so thoroughly immersed in a book. This is a story told in multiple voices, often in short chapters, but the plot is so satisfying and the language so beautiful that I lost myself within its pages. Reading it was like sinking into a dream and I spent my days waiting for the chance to pick the book up again.

Inspired by the fairy tale East Of The Sun And West Of The Moon, North Child is mainly about two characters: Rose, the adventurous girl who was always destined to leave her family, and the mysterious white bear. We also hear from the Troll Queen, our antagonist, and her story of desire and greed and heartless cruelty interweaves with those of the main characters.

Rose’s mother, father and brother Neddy are also given narrative voices. This may seem unusual at first, but Pattou pulls it off with great skill and the result is that we get a rounded picture of Rose. We learn about her home life and the people she loves even when she is miles away from them.

It seems no coincidence that weaving and threads are motifs within this narrative. The writing itself is like many richly coloured threads worked together into a tapestry.

There are so many memorable imagines within this story. Rose working at a loom to create herself a cloak fit for adventure. The White Bear carrying Rose over a frozen landscape. Rose and the Bear playing music in their many hours together in the palace. This is a very visual, very detailed story that remains in the mind in vignettes much like a fairy tale.

An epic tale about love and possessive desire told by a great storyteller. If you love fairy tale adaptations or simply good writing, this one is for you. The perfect story for long Wintery nights.

Thanks to Usborne Publishing for sending a proof copy of North Child. Opinions my own.

Review: Alice’s Adventures In Wonderland & Through The Looking Glass. Illustrated by MinaLima.

‘What is the use of a book,’ thought Alice, ‘without pictures or conversation?’

Alice would, I feel certain, approve of this edition of her tale. There are pictures and graphics and a wealth of patterns. The Mina Lima classics range has become something of a cult hit in the book community and they also make the most beautiful Christmas presents known to bookish kind.

MinaLima is a design studio based in London. Best known for their contribution to the Harry Potter films (look out for the Daily Prophets and Quibblers and Weasley’s Wizard Wheezes logo), their iconic style and meticulous attention to detail make their work instantly recognisable to their many fans. My favourite aspect is their distincitve use of pattern.

What makes their work so suited to Alice In Wonderland? 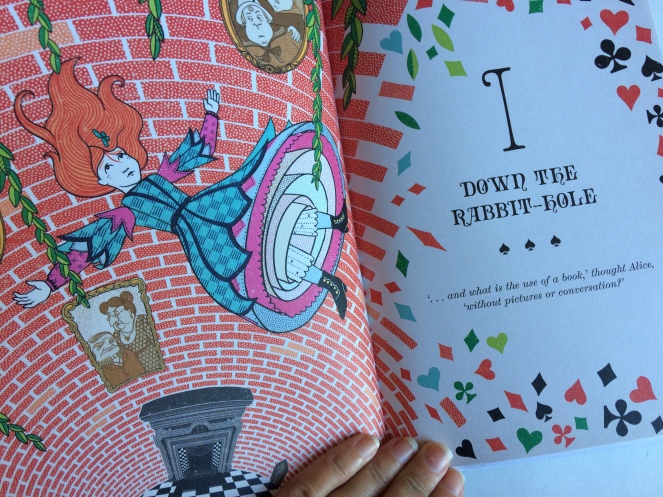 Anyone who is familiar with previous editions of Alice will be aware that – with several ntoable exceptions – it is often perceived as a mildly scary story. Think of Tim Burton’s films or the seminal work of Sir John Tenniel. While the book is never portrayed as a horror, the darker side of Wonderland often comes out in the artwork. MinaLima’s editon builds on this with a sharp-clawed Cheshire Cat, thorned plants and the scariest card people since Tenniel’s edition.

Interactive elements include fold-outs and tabs and lavishly-illustrated game boards. This is not only a book but a fully immersive Wonderland experience.

It is always a pleasure to revisit classic texts. Too often we think we are familiar with these stories because they have been retold and animated and become part of our pop-culture. Going back to the original prose teaches us more about the world than anything else ever could and a beautiful gift edition is a perfect reason to dive back into the story.

I own the MinaLima Peter Pan and spent Christmas 2015 enthralled by the detail, and drinking in the story as a result. Alice In Wonderland & Through The Looking-Glass lives up to the high MinaLima standards and I expect it to be popular this holiday season.

Thanks to Antonia Wilkinson PR and Harper Collins Publishers for my copy of Alice In Wonderland & Through The Looking-Glass (Illustrated by MinaLima). Opinions my own.