Review: Gregory Goose In On The Loose board book series by Hilary Robinson and Mandy Stanley.

Featuring On The Moon and In The Jungle.

Gregory Goose gets everywhere. The trouble is, it can be difficult to keep up with him when there is so very much to see. This wonderful board book series challenges readers to find Gregory Goose on journeys through different environments.

With bright and attractive pictures, these books offer an exciting game of hide-and-seek.

This format is ever popular, but what I love about the Gregory Goose series is it doesn’t push the game on the reader. It is just as possible to read through one of the books to enjoy the setting as it is to stop and search for Gregory Goose. Every double page spread introduces something new – so when Gregory Goose goes to the moon, for example, we are first introduced to rockets, then to stars, then to planets and so on. This makes the books excellent vocabulary builders. The close focus on one location makes it easy for the reader to pick up new words. 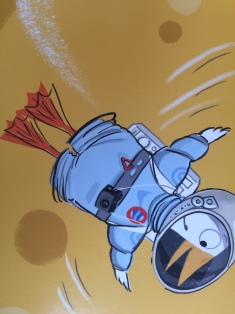 Gregory Goose himself looks friendly and inquisitive – much like a young child exploring the world for the first time. He is a kindred spirit on the great adventure that is this world.

There is a rhyme scheme to the text, but it feels entirely natural, much like being spoken to in a slightly sing-song voice. This makes the books perfect for repetition – and they will certainly be on repeat for many readers!

The perfect books for little adventurers on the hunt for new facts about the world.

Thanks to Catch A Star for my copies of the books featured in this review. Opinions my own.

Review: Field Trip To The Moon by John Hare and Jeanne Willis

The aliens watch while a group of children is guided around the moon. They stick together for safety … all except one boy who slips away to draw pictures of what he sees. When he gets left behind, the aliens creep out to watch him, and together they add some colour to the moon.

A story of friendship, exploration and caring for the places we visit.

With the 50th anniversary of the Moon landing in July 2019, a whole spate of books has been published, from fact files to real-life stories of space scientists to stories set in outer space. This book falls into the latter category, imaging what a school trip or day out might look like if we could travel en-masse into space.

The story is told in rhyme and balances both the gravitas of major exploration and the light excitement of a day trip. The one child who does their own thing will be familiar to anybody who has lead a group of children outdoors (or been a child on a school trip) and I was pleased to see the story showing that this can be lead by curiosity rather than trouble. Although the boy is in the wrong, he is the only person who takes enough time to look back and admire the view of the earth.

When the aliens come out, the real fun begins.

Their world is grey, and they have never seen so many colours as the boy holds in his crayon packet. A new game begins and soon the boy is less frightened about being left behind.

The illustrations have a futuristic feel to them, and the reader is always looking forwards on to the moon landscape as if they were standing up close to the boy. This sense of being right there makes the story even more exciting.

This would be a lovely story to get readers interested in the Moon anniversary and to help them imagine where the future of space travel might lie.

Thanks to Macmillan Children’s Books for my gifted copy. Opinions my own. 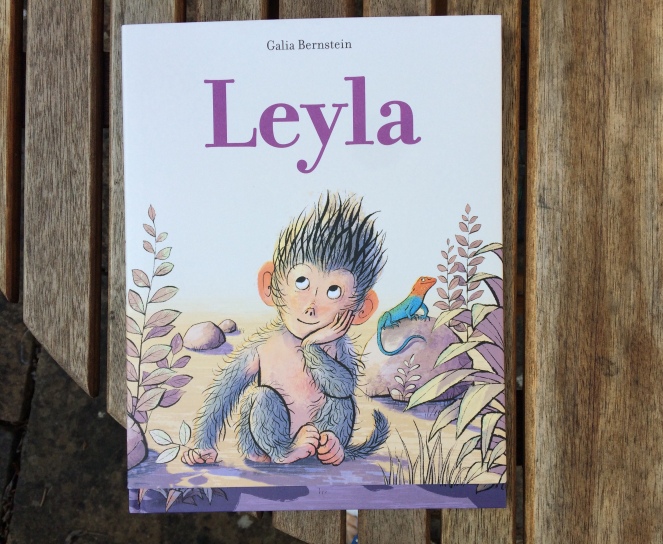 Leyla has a big family. A huge one. They’re always around, making noise and fussing over each other and generally getting in the way. One day Leyla’s has enough. She heads outside and goes off on a big adventure. She meets a lizard who teaches her to find a quiet space inside herself, and to enjoy the outdoors.

A cute and relatable picturebook about large families and small living spaces.

Leyla has a huge family, but it doesn’t take a big family to get on top of each other. With young families struggling for space, especially in cities, many children today will be familiar with the difficulties of not having enough personal space.

Leyla discovers three things during the same adventure. She finds the quiet of outdoor space which is open to everyone. She learns to meditate or to enjoy her own inner peace. Finally, when she returns home with a minor injury, she learns that it is always better to have family and be loved, even if it means struggling for space.

The baboons in the story have such extraordinary facial expressions and poses that I feel certain Galia Bernstein has spent lots of time observing them in life and learning their mannerisms. The early pages show Leyla squashed in with her family, with no other background, but when she gains a new perspective we see the baboons life close to a large outdoor space. I love the contrast between Leyla squashed in among her family and the next pages where she explores the outdoors.

A story which appears to be written from the heart, with a lovable cast of characters.

Thanks to Abrams Kids for my gifted copy of Leyla. Opinions my own.

Did you know that NASA astronauts have grown plants in space? That the highest mountain known to mankind is on an asteroid? That the centre of a comet is made of ice? This book is filled with fascinating facts about the world beyond our planet.

A contents page divides the book into different facts although the sections are not divided. This could be flicked through or consulted for facts on one subject, although I think its strength is in the former. It’s striking, retro-style illustrations catch the reader’s interest and make it impossible to resist finding out more.

With one or two facts on every page, limited to a few short lines of text, this is the perfect book to foster an early interest in space and physics.

The book covers facts about space itself – about planets and asteroids and gravity – but it is high on human activity in space and the advances made by space science. With the 50th anniversary of the moon landing taking place this year, there has never been a better time to read up on this topic.

The restricted colour palette and use of block colour backgrounds gives the illustrations a  pop-art feel, although the humour in them brings them right up to date. They would translate into beautiful posters and it is impossible not to stop and look closer when flicking through the book.

Thanks to Catherine Ward PR and Pavillion Books for my gifted copy of Odd Science – Spectacular Space. Opinions my own.

Review: The Big Beyond by James Carter and Aaron Cushley 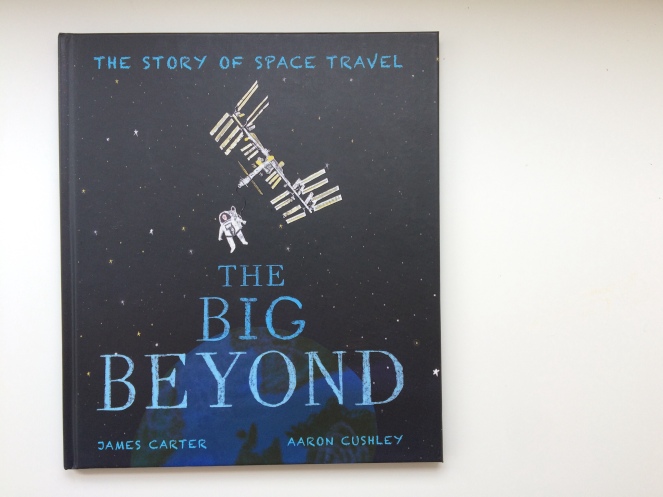 Once upon a time man looked at the skies and dreamed of the stars and planets which lay beyond the Earth’s boundaries. Over the centuries our understanding of space grew until, in 1969, humans walked on the moon.

This beautiful rhyming picture book takes readers on a tour through the centuries, from the time when stories about the constellations were told, through Galileo and his telescope to the moonwalk and beyond. It is a beautiful introduction to physics and space travel and encourages readers to see themselves as future astronauts.

Multisubject approaches are so important. It can be easy to talk about scientific concepts in isolation and yet when we give them historical context, it not only explains what the big breakthrough was and why the science is so important, but it emphasises that science is a process of question and discovery (and not one of parroting formula). Beautiful texts like this make this idea accessible and exciting.

There is so much joy in the illustrations. What might have been a heavy topic is made fun through the young characters pretending to fly, looking at the constellations and dressing up as astronauts. This book is not only about history, but it is also a nod to the future and it encourages the reader to aspire to the highest travels.

There is a lovely fact file at the end with some key dates and figures. This is written as a separate acrostic poem with the word rockets and again it was a joy to see creative writing forms used in a book about science.

A joy to read and share. This will encourage readers young and old to look up to the stars.

Thanks to Little Tiger Press for my gifted copy of The Big Beyond. Opinions my own.