The Moon King is delighted when he finds out he is to become a father, and he vows to give his daughter the most beautiful present in all the world. He captures the Starbird, whose legendary voice fills the young Princess’s dreams with magic.

One day, the Princess notices that Starbird’s songs are filled with sadness and longing for the open skies. When the Moon King finds out that the Princess has set Starbird free, he vows to hunt high and low until the bird is recaptured.

The Princess begs and pleads with her father to see reason, for she knows that a living thing can belong to no other being.

A beautiful folktale presented with striking illustrations for a new generation.

Starbird – and variations on the story – is a story of hope for humankind. As equally as it makes us despair for the actions of people who have believed they can enslave and claim ownership of other lives, it brings hope. This story has been passed through the generations so clearly there have been voices speaking against such actions throughout time. It gets to the very core of the attitudes that have caused, among other things, the current Climate Crisis. To make a difference to the world we have to put aside the idea that ownership and profit are important. 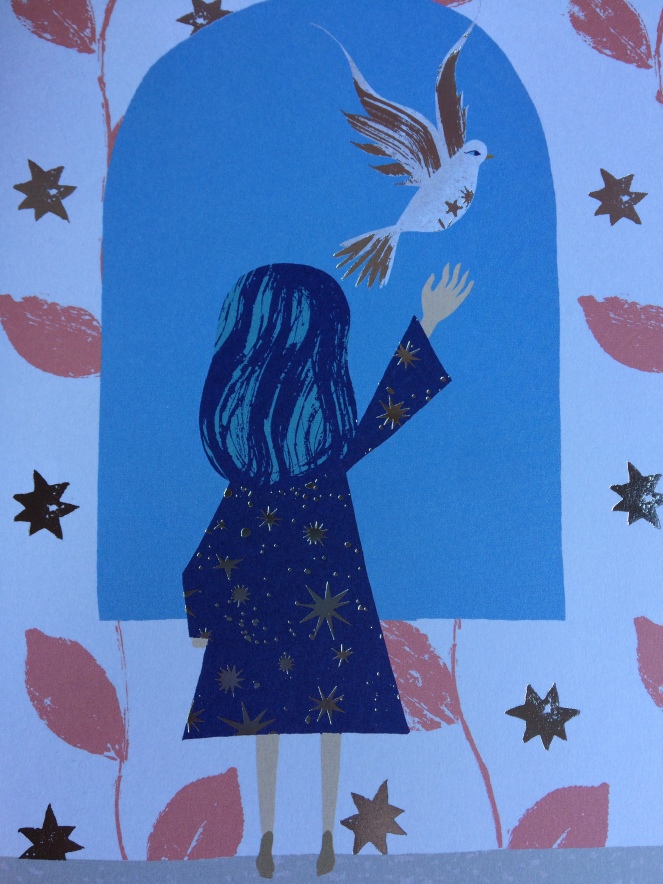 With plenty of great books coming out which have an overt message, is it lovely to see a folktale that happens to be relevant to our times. Readers will be introduced to this tale without expecting a message and so it will be their empathy for Starbird that leads them to think more broadly other issues. Otherwise, it is simply a beautiful tale to read over and over.

The illustration and design of this story is stunning and it stands out as a particularly special book because of it. Striking landscapes in pale colours alternate with patterned pages where animal shapes can be made out it the blank space between different designs. Silver foil detail is used to great effect throughout. There is a particular focus on skies – starry heavens, and swirling Arctic lights and pale sunsets over the mountains. This enhances our emotions around Starbird’s longing for freedom because the skies make a contrast with the metal bars of his cage.

It is always nice to mix Christmas stories with fairytales, folklore and classic stories. Starbird’s stunning illustrations and sparkling silver detail make it the perfect book to read over Winter and it is a story that offers a message hope and love for our times.

Thanks to Two Hoots (Macmillan Children’s UK) for my copy of Starbird. Opinions my own.