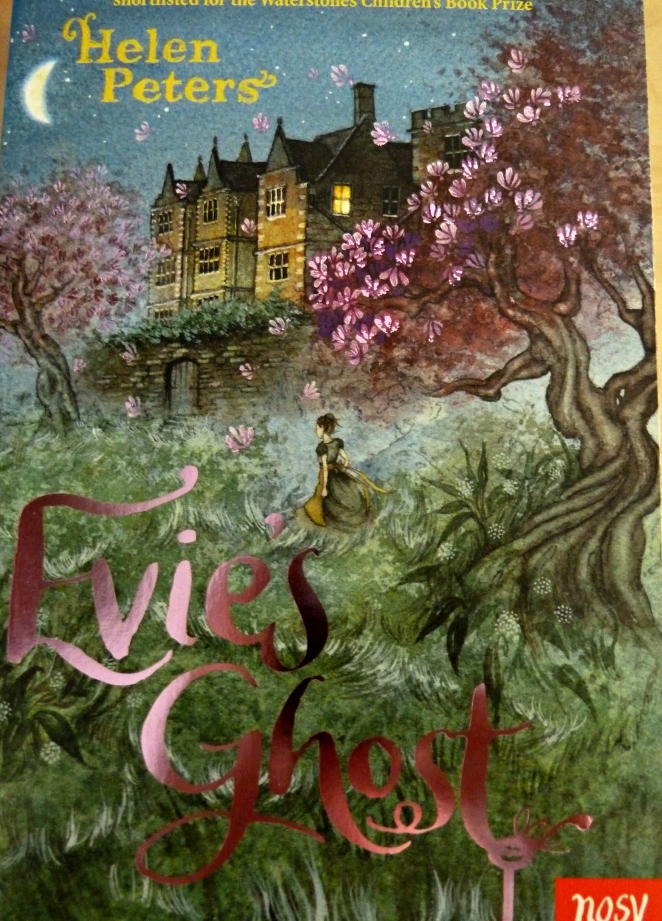 I screamed, yanked the curtains back together and ran from the room. There was no way I was going back in there. No way I was staying in this flat. I would wake Anna and make her take me back to London, back to my own home, right now, this minute.

As I ran through the doorway I had the weirdest sensation. For a moment, I felt as though I ceased to exist. It was as though my body had dissolved into thin air.

Then, as the door slammed shut behind me, the sensation faded and I felt solid and whole again. It must have been some sort of fainting-fit, I thought, only without the toppling over part.

Mum’s gone to Venice on her honeymoon with Marcus. Not only has Evie been left behind, she has been forced to stay with the godmother she has never met, who lives in a totally ancient house devoid of all Mod-Cons. Evie can’t imagine anything more unfair. Modern childhood is tough … right?

There is a message scratched on to her window. Apparently, some girl was locked in the room and forced to give up her baby. When the clock strikes midnight, a ghost appears at the same window and begs Evie to help. Evie runs from the room … into 1814.

Life as a housemaid in 1814 is tough, but if Sophia Fane is anything to go by, it isn’t much better being a lady. Sophia’s father wants her to marry Mr Ellerdale with all his land and money, but Sophia is in love with Robbie the gardener. Is this the same Sophia Fane who died alone in Evie’s bedroom? Can Evie change the course of history? What can she learn from living as a housemaid?

I love timeslip. I’ve read so many, my expectations are high. Evie’s Ghost is wonderful – an old school timeslip reminiscent of Charlotte Sometimes and Tom’s Midnight Garden, brought up to date with a thoroughly modern character and issues relevant to the moment. Although the structure was familiar – midnight chimes, protagonist goes back to change the past – the themes and character development made this a different story to any I have read before.

The main themes are rights – rights for women, and rights for children. The other main theme is social division. Evie’s Ghost is a timely reminder that rights are fought for and easily lost, especially when other people stand to gain from the removal of those rights. This is a big theme for a Middle Grade audience, but Peters handles it well. In the same way Lauren St John introduced the concept of Human Trafficking in Dead Man’s Cove, there is just enough ‘issue’ and plenty of story. Readers are given something to ponder, but in terms of the story there is always a reassuring sense that Evie is on the case. For these characters at least, things may be put right.

What I love most is Evie’s development as a character. At the start of the story she cannot imagine any deeper injustice than being left out of a trip to Venice. When she first hears what happened to Sophia, it is something she cannot comprehend. Something she thinks has no bearing on modern life and modern problems. Gradually, she empathises with the people she meets in the 1800s, and eventually reconsiders her own life as a result of her experiences. If I found Evie’s development interesting, I think the nicest character is Polly. Her gentle acceptance of her lot in life made an interesting contrast to Evie’s total indignation.

The setting is brought to life with emphasis on change. Evie constantly uses words which were not in circulation and takes pleasure in the countryside undisturbed by the sound of traffic. I love how this gives a sense of time’s progression. The time period is well chosen, as a time of social upheaval and immense poverty.

If you are looking to expand your reading following Evie’s Ghost, Dorothy Wordsworth’s journal makes regular mention of the impoverished people who came to Dove Cottage, and sometimes elaborates on the reasons behind their situation.